Amazon recently announced its Alexa Healthcare Skills, along with a developer program to build Alexa skills in a HIPAA-eligible environment. There are currently 100 million Alexa units in the market today.

So far, six healthcare companies have launched healthcare skills for Alexa that allow users to securely interact with their health data using the Alexa platform.

Alexa skills are digital experiences that allow a consumer to use their voice to make a request to an Alexa-enabled device. The Alexa Skills Kit (ASK) is Amazon’s software development kit, which contains code samples, documentation, and APIs for developers to build skills, or what Amazon calls voice experiences.

Alexa offers an easy way for people to receive personalized information about their health and manage their healthcare services.

For example, Boston Children’s Hospital created a skill to augment its Enhanced Recovery After Surgery (ERAS) program enabling caregivers and recovering patients to update their care team using “a series of targeted, self-directed questions.” Digital health startup Livongo’s skill allows people with diabetes to access information such as their most recent blood-glucose reading. Alexa can also let a user know that their blood sugar is high or other nudges.

Amazon is inviting more developers to share their contact information and submit their use cases online—which means that the company is netting ideas for future innovations.

While Alexa may enable health-related interactions conveniently and with less friction, privacy is top of mind for software developers and consumers.

Bloomberg reported that thousands of Amazon employees listened to conversation snippets from Alexa users, which were tied to device serial numbers and the owners’ first names. In fact, the option to share this type of information with Amazon is enabled as the default setting.

Last year, Alexa reportedly recorded a person’s conversation and sent the recording to somebody in their contact list without permission. Months later, Amazon fulfilled a user’s request for personal information, and included 1,700 audio samples of voice commands that belonged to other customers in the data they released.

Despite these early stumbles, the number of Alexa-enabled devices continues to grow as Amazon incorporates the tech into more devices, such as earbuds. It’s become increasingly clear that this adoption among consumers opens up significant potential for hospitals, insurers, and other healthcare firms to explore integrating voice technology to improve their customer experiences. 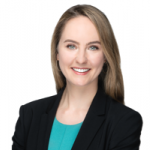 Morgan Stevenson is the director of client success at Vynyl. Morgan comes with a background in healthcare technology, management, and operations. Prior to joining Vynyl, Morgan was responsible for managing accounts and strategy for clients such as Genentech, Medtronic, and UnitedHealthcare. Outside of work, Morgan enjoys tutoring and providing academic mentorship for under-resourced K-12 students.